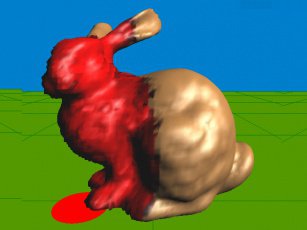 Master thesis describes a physical simulation of burning solids in computer graphics and its implementation. It is focused especially on simulation of material decomposition, heat distribution and object disintegration. Thesis describes some existing methods used for simulation of this phenomenon and on base of it is proposed an application, which implements these procedures. Namely they are heat distribution in rigid body and its nearby, pyrolysis, material decomposition and object disintegration with motion simulation under gravity. Heat distribution in environment is modeled as fluid dynamics simulation, which ensure flow of air around the object. To model the decomposition is object represented as a signed distance field, which is changing by pyrolysis during the simulation process. For object disintegration and its collapse is used PhysX and for movement of the object in fluid dynamics simulation environment is used method of overlapping grids. Implementation of some parts of methods is computed on graphics processor with CUDA to speed up the application.