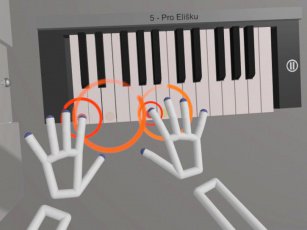 The aim of this thesis was to create a game that enables users to play the piano in virtual reality. For this purpose Leap Motion technology was used to track hand movement. In this music game user plays the two-octave keyboard and his task is to play missing tones of the song based on visual instructions. The game development was preceded by an analysis of the technologies needed, such as Leap Motion and HTC Vive. Inspiration for this game was research of similar games. Emphasis was placed on virtual reality music games, musical instrument simulators and games controlled by Leap Motion. The thesis describes design, implementation and user testing of the created game. The result is a functional game where the user can choose from six songs each in two different difficulty levels.