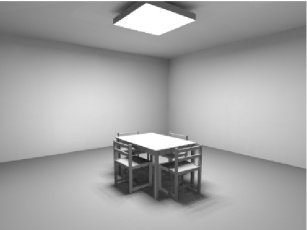 Global illumination algorithms form a fundamental part of the realistic image synthesis discipline. They consider the necessary indirect illumination component, and they usually produce highly plausible images. On the other hand, the precise evaluation of the indirect illumination tends to be the most time consuming part of the rendering process. Huge speedup can be achieved with the use of stochastic illumination estimators. An example of the stochastic approach can be found in the Instant Radiosity algorithms. We explore the family of the Instant Radiosity algorithms focusing on the Imperfect Shadow Maps (ISM) method, which was introduced by Ritschel et al. in 2008. The subject of the submitted thesis is the implementation of the ISM algorithm with a consideration of the possibilities of a modern GPU (2011). Our ISM based renderer produces satisfactory images in real-time frame rates.